Stroke is a consequence of the obstruction or the rupture of a vessel supplying the brain, results in a neurological deficit of sudden installation, which can concern various aspects including motor ability, language, sensitivity or even vision just to name the most common symptoms.

Manifestations vary and depend on the site of the brain injury. There are 3 main types of stroke [1] :

Strokes are both frequent and serious conditions and are a priority in health. In France, it is estimated that 140,000 people are victims of a stroke each year, it is one of the main causes of death in France and in the world. According to

Stroke is an absolute medical emergency where every minute counts; “Time is brain” as neuroradiologists say. In most cases, the patient is treated in a neurovascular unit (UNV), specialized in stroke management or in an emergency department. The team is then in charge of confirming the diagnosis and specifying the nature and severity of the stroke.

To determine the type of stroke and the severity of the damage, imaging plays a key role in the diagnosis, and availability of technical platform is essential. MRI imaging is the recommended technique and even if access is prioritized, in most cases access to this modality remains complicated. Likewise, performing an MRI examination requires more time, despite a clear evolution in acquisition techniques, than with CT, for example.

For the reasons explained above, the most frequently used modality for stroke management is still CT. Today, the optimal 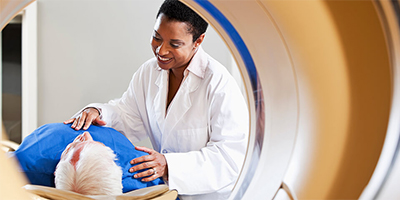 management strategy consists of performing a CT scan without injection. Today, the optimal management strategy consists to perform a CT scan without injection which is generally sufficient at a very early stage. The main objective of this examination is to confirm the indication for treatment with IV thrombolysis, in the context of a very suggestive clinical case, with a certain time window and if the patient is agitated [3].

Performing a CT scan without injection can classify the stroke and define whether it is an ischemic or hemorrhagic stroke, as well as quantify ischemic lesions. The radiological signs suggestive of the CT examination are a decrease in density, a reduction in contrast between white and gray matter or an erasure and a mass effect of the cortical grooves or the lateral fissure.

The ASPECTS score (Alberta Stroke Program Early CT Score), which was developed to provide a simple and reproducible quantification tool for early signs of cerebral ischemia, must also be established from two standard axial CT sections. Between these two planes, defining the territory of the middle cerebral artery (MCA), we divide into 10 regions, each worth one point, with three points allocated for the subcortical structures and seven points for the cortical parts, for a total of 10 points. One point is subtracted for each region where there is an early ischemic change, an ASPECTS score 10 means a normal CT scan and an ASPECTS score 0 means diffuse ischemia throughout the MCA territory. This score allows a quantification of ischemic lesions, it has some limitations, however, its limitation to the area of ​​the MCA and in the context of an extension of ischemic lesions to other vascular areas, it does not allow identification of patients who may receive a thrombolytic. However, the ASPECTS score makes it possible to define a prognosis in terms of residual disability or hemorrhagic transformation (poor prognosis for a score ≤ 7). 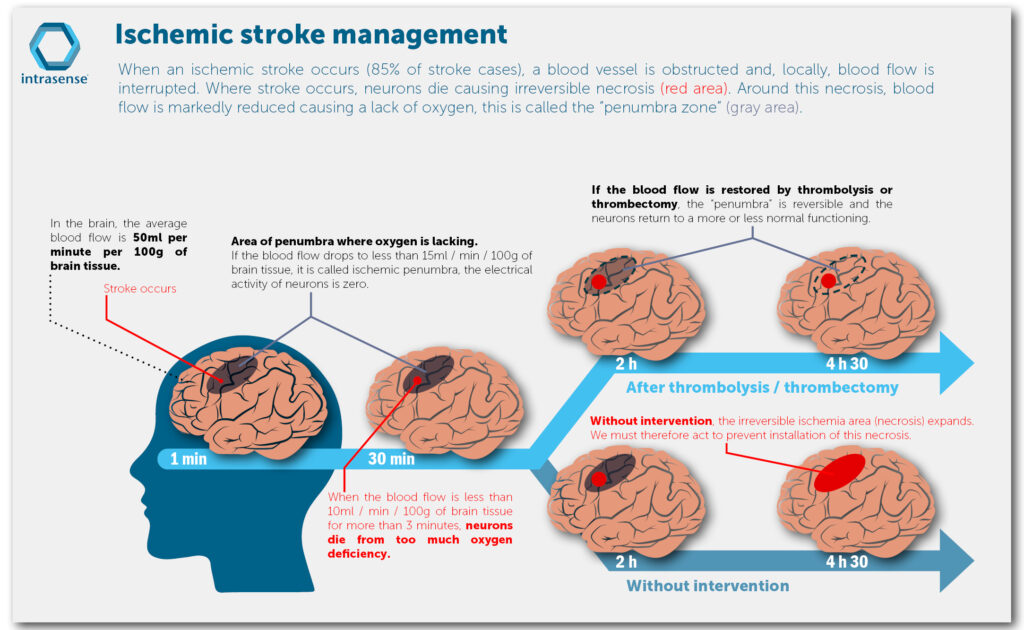 Cerebral perfusion imaging in CT scan is a technique allowing a quick and quantitative evaluation of the vascularization of the brain, thanks to realization of repetitive acquisitions on a defined area then the creation of parametric maps (CBF, CBV, MTT, TTP, Tmax…). It is performed with injection of a contrast enhancement product as an intravenous bolus. The analysis of the signal during the first passage, through the capillaries of tissue, makes it possible to estimate a few parameters such as the TTM (mean transit time) or the VSC (cerebral blood volume).

The concept of mismatch corresponds to the difference in volume between ischemic zone detected in the Tmax map and the volume of the zone with disturbed hemodynamics, analyzed in the CBF map. We see that in one in three cases there is no difference between these two areas, and therefore the absence of a mismatch ratio. This characteristic makes it possible to predict the low risk of secondary increase in the volume of ischemic lesions, therefore contraindicating an aggressive therapeutic choice such as thrombolysis. In contrast to this, in two out of three cases, mismatch ratio shows a significant difference (greater than 1.8) between the volume of ischemic heart and penumbra area, which is an area that will potentially necrose, in absence of rapid reperfusion therapy.

A specific workflow for stroke management 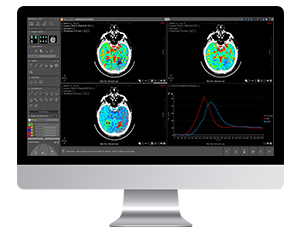 This clinical application provides real assistance in therapeutic decision-making, extremely quickly, with support for entire examination. By proposing a standard MPR visualization step for the examination without injection, a visualization step of the injected series with multi-phase navigation and finally the ischemic lesion analysis step with identification of the penumbra area and the ischemic heart. Obtaining the mismatch ratio in seconds and fully automatically. Application also allows display of parametric maps (CBV, CBF, Tmax, TTP, MTT) and their analysis. Steps allow the user to correct, if necessary, the different phases of segmentation, to be as exhaustive as possible on the result obtained. As each patient has their own clinical parameters, user is given the opportunity to adapt hemodynamic values ​​to optimize results and make the best therapeutic decision. Discover all the capabilities of Myrian XP-Brain Perfusion CT.